How a Pulitzer Prize Winner Writes a Job-Leaving Farewell Letter 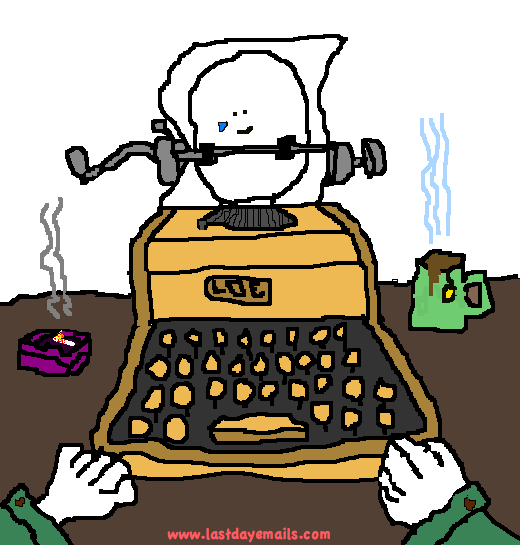 Okay, that’s fair, I get ya.  You want to get out of this maddening enclave for mild Asperger’s as soon as possible.  Plus, what did these people ever do for you?  But it’s 5 PM on a Friday and the poor schmucks are waiting around for the last word on whether they’ll have to work over the weekend.  Meanwhile you’re trying to stop yourself from whistling with pleasure as you force feed your old files to an industrial-sized paper shredder.  Don’t you think the poor schmucks deserve something more than a crappy template?

If you’re feeling charitably inclined towards your soon-to-be ex-colleagues as you sit down to draft your departure email, take a look at how the pros do it.

Dan Neil won the 2004 Pulitzer Prize for Criticism for his writing about cars.  Earlier this year he left The Los Angeles Times for The Wall Street Journal and wrote the following departure email, which was then posted online.  I will identify 6 techniques in Dan Neil’s email that can be incorporated into any departure letter and compare and contrast his execution of those techniques with that of a law firm partner.  In other words, let’s take a look and see what you can copy.

Subject: Dan Neil on the bounce

Whether used as a salutation or placed somewhere in the middle, a list of types of people at the workplace is a Last Day Email mainstay.  The order in which workplace demographics are listed usually reveals the writer’s thought process and value system.  Here’s the opening salvo from our law firm partner:

To My Partners, Colleagues and Friends,

You can see just what he was thinking.  The readers at the forefront of his mind, the people that he was primarily writing to, were the other partners.  So that came first on the list.  Then he thought about the more junior lawyers at the firm, and imagined them reading his words with admiration and wonder, so he wrote “colleagues” next.  Finally, he realized that he wanted to send his email to everyone in the office, not just the lawyers, but what… what are those non-lawyer people called?  The ones that know where to get more of those pens with the padded, the padded barrels and who can, as if by magic, convert two-dimensional pieces of cardboard into magnificent document holding structures?  After some thought, he shrugs and decides on “friends.”

That’s not bad.  But a Pulitzer winner goes one step further and thinks about the effect of his words on his readers.  Starting out with “Friends” as Dan Neil does is classy –it is all inclusive.  No one reads it and thinks, “Oh that is not me, I guess I’m somewhere further down the list.”  Instead, everyone from management to mailroom reads it and finds that it feels nice to be addressed as a friend.

Our Pulitzer winner begins his Last Day Email with a strong defense of the LA Times:

In the past week or so people have come up to me and said words to the effect: “The Journal, huh? Sinking ship and all that?”  And I just want to slam their heads in a car door.

I absolutely love this newspaper and I am immensely proud of my association with it.  People who talk shit about the LA Times to me are going to find me in their grille in a major way.

This morale boost isn’t too touchy-feely because the writer employs curse words, puns relating to his automotive writing, and violent imagery.  The effect is that he makes you, the reader, feel good for being you.  He’s saying, “I’m leaving you, but you f*cking rule.”  You can do this too, but drop the automotive puns or it will look like you have anger issues.  Perhaps something like this would work for a law firm:

In the past week or so people have come up to me and said words to the effect: “XXXX LLP, huh?  Sinking ship and all that?”  And I just want to paper cut them with thick manila file folders on that soft webbed part between their fingers.

3.  THE PERSONAL STORY
Do you know what everyone loves?  A story.  And what’s more humbling and dramatic than a story of redemption by the workplace?

Maybe you don’t know this story. In November 2002 I had just come through an awful divorce (we pronounce that DEE-vorce in North Carolina).  I was sitting heartbroken and alone in a villa in the south of France, on some godforsaken travel assignment, contemplating the taste of gunpowder.  Nobody knew where I was.  The phone rang.  It was former editor John Carroll, who had somehow tracked me down.  He wanted me to come to Los Angeles and be the paper’s car critic.

Well, I said to him, as it happens my schedule has just opened up.

It was the beginning of the most wonderful professional experience of my life, the most fun, the most satisfying, the most intellectually challenging.  This placed saved me. It made me.

As Dan Neil’s email demonstrates, the formula for the Personal Story for a departure email is:

Let’s go back to that law firm partner email we were looking at earlier:

When XXXX and XXXX called me to invite a conversation in late 19XX, I was thankful for the opportunity, as I was at a low point in my career, and they ‘vouched” for me (notwithstanding my sordid college history with XXXX and my days as an associate with XXXX).  But for their friendship and confidence, I would not have had the chance to join this fine firm and become a part of the XXXX family.  Literally speaking, they picked me up out of a most difficult situation, and I vowed to pay them back by proving myself to them and to XXXX.  I hope I have.

Ok, so it’s not as eloquent as Dan Neil’s and it leaves me with homoerotic images of a bunch of male lawyers who had a “sordid college history” together “literally” picking each other up from “a most difficult situation.”  But it totally makes me sit-up and pay attention.

Dan Neil was an outspoken critic of Sam Zell when he purchased the LA Times in 2007, and he unabashedly expresses his sentiments in his departure email:

It’s been a rough few years here, mainly because of the jackasses in Chicago who own us.  To them I say, with as much gusto as I can muster in an email, fuck you.

You too, can use the Common Enemy technique.

It really doesn’t matter whom you vow eternal vengence on, or whether your company even has a common enemy, as long as you use the term “jackasses.”  No one likes jackasses.  Everyone just wants them to be f*cked.  I think it’s something about the word itself.  When you think of a jackass, don’t you envision someone with arrogant hair and an annoying face, kind of like Pepe Le Pew in a suit?  Don’t you just want him to get f*cked up?
To employ the Common Enemy technique in your departure letter, simply copy Dan Neil’s eloquent phrasing, but replace “Chicago” with “Washington.”  That’s it!  It’s okay, you don’t have to have a particular person in mind, or even a particular party.  Maybe the people at your office won’t agree on exactly who the jackasses in Washington are, but it’s not alienating because everyone vehemently agrees, without a doubt, that there are jackasses in Washington.
5.  THE HAPPY ENDING
Dan Neil’s Happy Ending takes the form of a one-two punch:

On a happier note, there’s not a person in this building I do not like, if not love. The paper has more greatness ahead of it, and I’ll be watching from the east coast and rooting you on.

If you are able and inclined, there’s a beer call at Redwood tomorrow, around 5 pm. Hope to see you there.

One statement about the company’s rosy future and another statement about beer.  Keep it simple and never forget the beer.  Let’s see how our law firm partner did with his happy ending:

For those with whom I worked most closely, my congratulations, for this surely is emancipation day – no more 4 AM emails or urgent weekend messages.

No more 4 AM emails or urgent weekend messages would be pretty great, of course.  But here is one instance where remaining vague actually rings less hollow than being specific.  Dan Neil wrote that the LA Times “has more greatness ahead of it.”  No one at the LA Times is going to be sorely disappointed in 12 hours when they wake up on Saturday morning, rub their eyes, and realize that greatness has not yet come.  But those poor lawyers who worked closely with the departing law partner will totally continue to receive 4 AM emails and urgent weekend messages, just from a different master.  This is when you should be like a good lawyer or a bad boyfriend, and keep your promises vague and fuzzy.

This is how a Pulitzer winner signs off his departure email:

I don’t know about you guys, but I got a little bit choked up by the third “thank you.”  Now, I know three thank-you’s –heck, even one thank-you– is probably way too emotional for most office workers.  I remember a law firm partner reprimanding “another” first-year associate for signing a letter with “sincerely” because “lawyers are never sincere!”  She was told to use “yours truly” instead –probably because it doesn’t mean anything.
But even if you are signing off with something bland and meaningless, at least consider repeating it a few times.  Sure, it’s sentimental, and horribly inefficient use of your delicate fingertips, but it’s your last day at the office, and maybe, just maybe, you could indulge in a little bit of digital feeling.
—-
This article was published on Lifehacker, with 74k views. It was picked up by Men’s Health, Mental Floss, and other online publications.
FILED UNDER: How a Pulitzer Prize Winner Writes a Job-Leaving Farewell Letter | Permalink