My first New York apartment was in Hell’s Kitchen, Manhattan. Up to this day, it is the fanciest apartment in which I have ever lived. There was an airy lobby with large gilded mirrors and abstract paintings on the walls. There was a sharply dressed doorman to help revolve you inside should your arms be overladen with shopping bags full of designer purchases. There was a gym with new equipment and a large wooden patio with chaise lounges strewn about in a casual, upscale way.

Of course, it being Manhattan, my own apartment was a small 500 square feet studio. But it was a corner studio, the counters were marble, the fridge had a dark and sexy allure, and there was a window in my shower so that you could see the empire state building while you scrubbed. 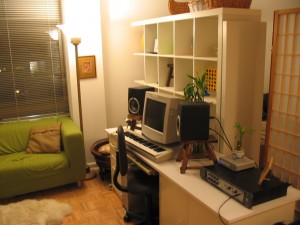 Inside my first Manhattan studio apartment.

“Look at you… all grown up now,” a friend of mine muttered the first time he stepped into my airy lobby. I myself was also in disbelief about the whole thing. Did I really live there?

I remember the day I found it. I was about to begin my grown-up job of being a first year associate at a gigantic law firm in Times Square, and I had been forewarned that this meant I would be slaving away for long hours, day after day, no weekends. So I figured I would want to live close by –which, as it later turned out, was a rookie mistake because whoever lived closest to work was the weekend whipping boy while more savvy outer-borough co-workers couldn’t possibly trek “all the way” into the city. Instead of using a broker or going through online listings, I took the straight forward approach of walking around Times Square and looking for residential buildings that might have vacancies for me.

As it turned out, most buildings in Times Square were not residential buildings. The difficulty of my search was exacerbated by how tall the buildings were. Sandwiched between towering highrises, it was difficult to see what was beyond them. Finally, I spotted a gigantic red sign that said: RENT. It was huge! And the sign even had a border of twinkling lights illuminating it. I smiled gratefully –now there’s a smart leaser! Why couldn’t all residential buildings in New York follow suit?

It wasn’t until I got to the box office that I realized the sign was for Rent, the musical.

Eventually, I walked all the way over to Ninth Avenue and found the residential building that would turn out to be my future home.

But even though I had the apartment and the job, on the inside I felt like a child. When I walked to work in the mornings in my high-heeled stilettos (my first pair, bought by mom) and faux-leather briefcase (a toy briefcase I used to play dress-up with when I was five), I would grin devilishly to myself –it felt so much like playing house, I might as well have been wearing a mustache!

At work, I kept expecting someone to point a finger at me and say, “What’s that kid doing here? Shouldn’t she be in school?” I couldn’t believe that grown-ups were talking to me like I was a grown-up too. I couldn’t believe that a forty-year-old father of two wanted to discuss my findings on how far we could stretch the definition of what a “security” was. Stretch it, I barely knew it!

The huge disconnect between my mustached life and my adolescent insides manifest itself in my daily habits. Every night after work, I would walk through a desolate Times Square to get home. The sky would be lit a pale pink by all the neon marquee lights and the streets would be so empty you didn’t even have to look up to cross them. Tourists, as it turned out, went to bed earlier than lawyers.

Night after night, I’d always trudge along the same path, in order to hit three landmarks.

The first one was a large loading dock for daily newspapers. Men of diverse ethnicities would drive up in cargo vans full of empty newspaper dispensing machines, retrieve a tall stack of tightly bundled newsprint from the loading area, and attack it with gusto until it was divided up into manageable piles and neatly inserted into the dispensers. It was hard, outdoor, work and at first I felt chastened watching them –how dare I pity myself for working long hours in my comfortable office with my own secretary, when here were men grunting under the strain of physical discomfort! But eventually, after several more months of biglaw, I would walk past these independent contractors with their hands pink and raw from the cold, and feel nothing but envy. After all, they got to set their own hours, and all that fresh air!

My second stop along the way was a bakery –not a fancy one, just one that supplied bread to local restaurants. If it was around 4 or 5 AM, you’d be able to smell the delicious scent of baking brioches and buns. It was a heady, yeasty, smell and it made me happy. Often times, I would stop in and buy a brioche bun, fresh out of the oven for a dollar twenty-five. I’d scarf it down on my walk home, luxuriating in the warmth and comfort of fresh bread.

My third and last stop was the 24 hour deli across the street from my apartment. I’d head straight for the freezer in the back and get a pint of Ben and Jerry’s ice cream. The stock boy who worked there would come over to say hi mami, and one of us would lower our voice and say something uncouth about our bosses, and the other would nod in solidarity.

In my apartment, I might eat a little bit of the ice cream, but more often than not, I’d make myself Aunt Jemima pancakes. I always made sure to get the “just add water” kind, because I never had any milk or eggs or other foods in my fridge. I’d make them underdone, so that they were just a little bit slurry. Then I’d plate them nicely and bring them, along with a nice tall bottle of Aunt Jemima’s maple syrup, to bed. Once comfortably set up, I’d pop in a Family Guy dvd –I didn’t have cable and couldn’t receive any channels on my tv– and watch it on the tv set I bought at Costco with my parents in what seemed like another lifetime ago.

My favorite part of the Family Guy episodes were the dining room scenes. Not because they were funnier, but because seeing a family eat a nice normal sit down meal reminded me of home in a nice way.

One night, I tried to replace all of that childish comfort food stuff with alcohol. I bought my first bottle of wine (and a corkscrew) and could barely contain my excitement at starting what would sure to be a recklessly romantic, wanton, chapter of my life. But I couldn’t, ah, open the wine bottle. It took seven attempts, copious amounts of cursing, several earnest pep talks, and plenty of breaks to finally erode enough of the cork that I could sort of push it deep enough into the bottle that, when tipped, would finally yield a small, handicapped trickle of red, red, wine.

So there I’d be, lying on my stomach, eating raw pancake drowned in maple syrup, bonding with a cartoon family, in the middle of the night in my grown-up apartment, trying to push away the spectre of another day at the office. I’d fall asleep with my fork in hand and wake up to spilled syrup and the endless musical loop of the Family Guy dvd menu page.

This article was originally published in Zouch Magazine.